We, the undersigned, Phil Dwyer, Hugh Bahlert and B. Gissenaas, inspectors of eleciton thereunto appointed by the Court to ascertain if the electors of the territory proposed to be embraced within the Village Of Pound assent to the incorporation thereof as the Village Of Pound, do hereby state and certify that an election was held under and in pursuance of the order of the circuit court for Marinette County to ascertain if the electors of such territory assent to such incorporation, on the 8th day of December, 1914, in the Village Of Pound, in the Town Of Pound, and within the territory proposed to be embraced in such incorporation, pursuant to the notice given therefor.  That the polls at said election were opened at ten o'clock in the forenoon of said day and were kept continuously open until four o'clock in the afternoon of said day.  That a poll list was prepared and kept at said election, upon which poll list was entered in consecutive order and number the name of each qualified elector voting at said election.  That at the  close of said election, and at the close of said polls as aforesaid, we, the said inspectors, duly counted and canvassed the votes cast at said election; that the whole number of votes cast and voted at said election were Fifty four (54); that the number of said ballots so voted having thereon the word "YES" were Thirty five (35); that the whole number of ballots voted and cast at said election having thereon the word "NO" were Nineteen (19); that the majority if said ballots so voted and cast and having the word yes thereon were Sixteen (16).
That annexed hereto and made a part hereof and hereby referred to is a sample of the ballot having thereon the word "YES" and a sample of the ballot having thereon the word "NO", each of which said sample is a true and correct copy or duplicate of the ballots so voted and cast at said election.
IN TESTIMONY WHEREOF, we have hereunto set our hands this 8th day of December A.D. 1914, at the Village Of Pound, Wisconsin.
INSPECTORS OF ELECTION:
{Philip Dwyer
{Hugh Bahlert
{B. Gissenaas


STATE OF WISCONSIN
County of Marinette
Phil Dwyer, Hugh Bahlert, and B. Gissenaas being each duly and severally sworn upon his separate oath, does depose and say that he is one of the inspectors of the election held in the Village Of Pound on the 8th day of December, 1914, mentioned and set forth in the above and foregoing statement.  That he has read the above and foregoing statement by him subscribed and that the same is true of this own knowledge.

A piece of history found in the Village of Pound...the "Johnson Shoe Store" sign found on the building, which is being remodeled by the owner.  "Out with the old & in with the New." 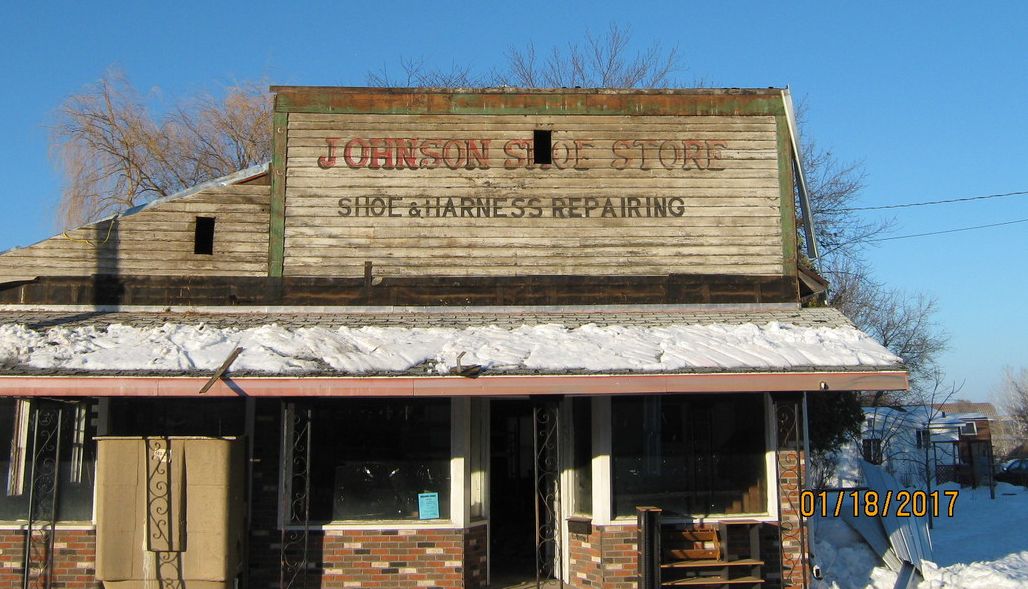